I can remember meeting him and asking him all about the farm… then he brought me home to show me the farm and I told his Dad I had ridden a ‘cultivator’, trying to impress him… his Dad told me he hoped I hadn’t and then the farmer told me I meant a ‘combine’…

if I had known back in 1999 when I was bragging about riding a cultivator that in 2020 I would have two sons and a daughter working on the farm with us, I don’t think I could have imagined what that would even look like…

and now comes the part where we are sad and happy… because we only get one more week of the boys working on the farm before one of them heads to College and the other off to High School… this year it won’t just be mom missing this boys… the farmer is really going to miss them...

we had a bit of a rain last week so it took a day to get back out in the field, but this allowed me to prep the pulled pork which was nice… I have to tell you, this is my family’s favourite pulled pork recipe and you are not wasting your time making this…

this looks like basically an entire pig and it felt like it when I was cooking it!

my Instant Pot can hold the entire Pork Shoulder Roast and using a pressure cooker really cuts back on the total time… if you don’t have one a slow cooker is fine as well, you just need to plan farther ahead…

making this a day ahead, I shredded the pork and added the liquid and onions and garlic and stored this overnight in the fridge… (for the liquid I did the same as I would do with gravy, I let it sit and then poured the juice liquid without the fat on the top going back in)

the trick to getting it crispy is to put the shredded pork onto a baking sheet with a little bit of the juice and place under a broiler for a few minutes… toss, add more juice and broil again… this gets it crispy and the liquid keeps it moist (there I go with that awful word again)

now you can serve this pork with tacos (or even over some nachos would be so good), but for the field I chose to put it on some homemade buns…

my boys did tell me that they could have eaten 8 of these, opposed to the three I gave them… I told them I didn’t want to wrap up 8 pork buns for each farmer out there…

Directions:
make the rub by combining the rub ingredients
cut the pork into four chunks
rub each side of the pork chunks in the rub
in avocado oil (or oil of your choice), brown the sides of the pork
place the browned pork, broth, orange and lime juice, cider vinegar, garlic, onion and bay leaves in a pressure cooker
on manual, set timer for 45 minutes (if you are using a slow cooker, this will take on high 4-6 hours)
when done, shred the pork and spread in an even layer on a baking sheet
broil until pieces are crispy, around 3 minutes
remove from oven and pour 1 cup or so of the reserved cooking liquid all over the pork
use tongs to toss and return to the oven for around 3 minutes under the broiler
pour more reserved liquid over the pork and give one last toss
serve on fresh buns with cheese or whatever toppings you enjoy

the farmer likes coleslaw on his pork buns, but I thought it would make them too soggy, so we sent them some coleslaw with a label saying they could add this to their buns… my guess is the farmer is the only one who took the time to do so…

this cake is a four layer cake, cutting the two 8 inch round cakes in half… for a stacked cake like this, it is really important to have everything cool while icing it or the whole thing could slide like the Tower of Pisa…

Instructions:
preheat oven to 350 and grease 2 (8 inch) round cake pans, line with parchment paper and grease the parchment paper, coat with flour
in a standing mixture beat canola oil, ricotta, eggs, sugar, vanilla and buttermilk
add the flour mixture
pour batter evenly into the two pans and bake for 40-45 minutes until a toothpick comes out clean from the middle of the cake
set on cooling rack in pan
once cooled a bit, turn out onto cooling rack, cover and let cakes completely cool
for the jam, cook the peaches, brown sugar, bourbon and raspberry jam until mixture is thick… let cool completely
for the buttercream, add 1 cup (2 sticks) butter to a saucepan and let brown until you can smell that it is toasty… remove from heat and add to mixing bowl until cool… when cool, whip up the toasted butter with the remained 1/2 cup (1 stick) butter and the icing sugar and vanilla
cut the two cakes in half
ice a layer of the cake and add jam, then repeat with the next layer
ice the cake
chill in the fridge for at least 30 minutes before you cut into it
store in fridge overnight if you have time and cut the next day for good results

one more week of laughing, farming stories, making lunches, mounds of dirty jeans and socks in the laundry… and I am going to enjoy every moment of it! the farmer did mention to me that mom’s are never happy… during Covid here I just wanted my kids to have their life back and now that they are getting it back I just want them home forever… 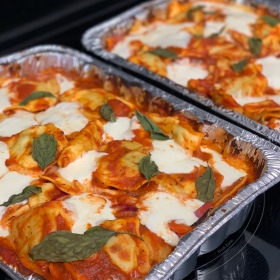 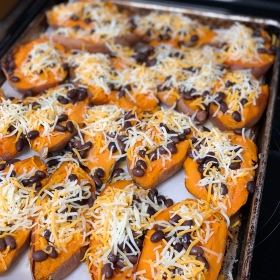